We study the reference point indentation (RPI) technique which has a potential to directly measure mechanical properties of bone in patients. More specifically, we tested 6 month swine femoral cortical bone at mid-diaphysis region to investigate the effect of several testing variables on the RPI outputs. They include the force magnitude, preconditioning, variation within a sample and between samples, number of cycles, indentation surface (transverse versus longitudinal, polished versus unpolished), and micro-computed tomography radiation exposure. The force magnitude variation test shows that all RPI parameters increase linearly with the increasing force magnitude except the indentation distance increase which shows a cubic trend with a plateau for force magnitudes between 4 N and 8 N. Preconditioning does not affect the trends for a force magnitude variation test. The cycle variation test shows that most RPI parameters reach either a maximum or minimum at 15–20 cycles. Transverse surface measurements are more consistent than the longitudinal surface measurements, but a rough surface and periosteum on the longitudinal surface could account for this difference. Exposure to the micro-computed tomography radiation in general does not have effect on the RPI measurements. For the 6 month swine femoral cortical bone, testing using 6 N force and 20 cycles with preconditioning on an unpolished longitudinal surface is recommended. This study advances our knowledge on how the RPI testing variables influence the RPI outputs and provides guidance on the RPI measurements. It may also serve as a framework for developing a standardized testing procedure for the RPI technique. 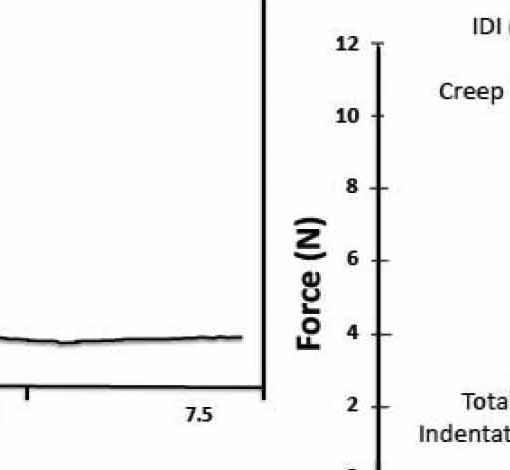