Murine muscle-derived stem cells (MDSCs) have been shown capable of regenerating bone in a critical size calvarial defect model when transduced with BMP 2 or 4; however, the contribution of the donor cells and their interactions with the host cells during the bone healing process have not been fully elucidated. To address this question, C57/BL/6J mice were divided into MDSC/BMP4/GFP, MDSC/GFP, and scaffold groups. After transplanting MDSCs into the critical-size calvarial defects created in normal mice, we found that mice transplanted with BMP4GFP-transduced MDSCs healed the bone defect in 4 wk, while the control groups (MDSC-GFP and scaffold) demonstrated no bone healing. The newly formed trabecular bone displayed similar biomechanical properties as the native bone, and the donor cells directly participated in endochondral bone formation via their differentiation into chondrocytes, osteoblasts, and osteocytes via the BMP4-pSMAD5 and COX-2-PGE2 signaling pathways. In contrast to the scaffold group, the MDSC groups attracted more inflammatory cells initially and incurred faster inflammation resolution, enhanced angiogenesis, and suppressed initial immune responses in the host mice. MDSCs were shown to attract macrophages via the secretion of monocyte chemotactic protein 1 and promote endothelial cell proliferation by secreting multiple growth factors. Our findings indicated that BMP4GFP-transduced MDSCs not only regenerated bone by direct differentiation, but also positively influenced the host cells to coordinate and promote bone tissue repair through paracrine effects. 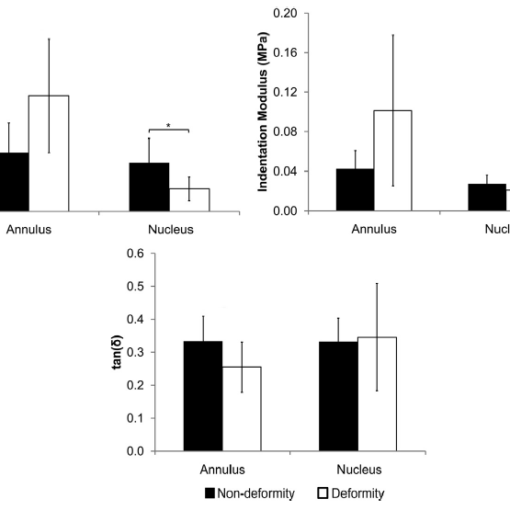 Abstract BACKGROUND CONTEXT: It is well-established that disc mechanical properties degrade with degeneration. However, prior studies utilized cadaveric tissues from donors with […]

Abstract Osteoporosis is a silent disease, characterized by a porous bone micro-structure that enhances risk for fractures and associated disabilities. Senile, or […]