The degradation of the main fibrillar collagens, collagens I and II, is a crucial process for skeletal development. The most abundant dipeptides generated from the catabolism of collagens contain proline and hydroxyproline. In humans, prolidase is the only enzyme able to hydrolyze dipeptides containing these amino acids at their C-terminal end, thus being a key player in collagen synthesis and turnover. Mutations in the prolidase gene cause prolidase deficiency (PD), a rare recessive disorder. Here we describe 12 PD patients, 9 of whom were molecularly characterized in this study. Following a retrospective analysis of all of them a skeletal phenotype associated with short stature, hypertelorism, nose abnormalities, microcephaly, osteopenia and genu valgum, independent of both the type of mutation and the presence of the mutant protein was identified. In order to understand the molecular basis of the bone phenotype associated with PD, we analyzed a recently identified mouse model for the disease, the dark-like (dal) mutant. The dal/dal mice showed a short snout, they were smaller than controls, their femurs were significantly shorter and pQCT and μCT analyses of long bones revealed compromised bone properties at the cortical and at the trabecular level in both male and female animals. The differences were more pronounce at 1 month being the most parameters normalized by 2 months of age. A delay in the formation of the second ossification center was evident at postnatal day 10. Our work reveals that reduced bone growth was due to impaired chondrocyte proliferation and increased apoptosis rate in the proliferative zone associated with reduced hyperthrophic zone height. These data suggest that lack of prolidase, a cytosolic enzyme involved in the final stage of protein catabolism, is required for normal skeletogenesis especially at early age when the requirement for collagen synthesis and degradation is the highest. 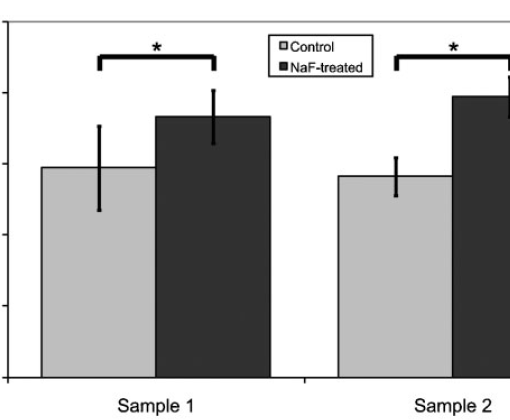 Abstract High doses of sodium fluoride in bones lead to severe softening, by weakening interfacial properties between the inorganic minerals and the […]

Abstract Non-enzymatic glycation (NEG) is an age-related process accelerated by diseases like diabetes, and causes the accumulation of advanced glycation end-products (AGEs). […]