Reference point indentation (RPI) is a microindentation technique involving 20 cycles of loading in “force-control” that can directly assess a patient׳s bone tissue properties. Even though preliminary clinical studies indicate a capability for fracture discrimination, little is known about what mechanical behavior the various RPI properties characterize and how these properties relate to traditional mechanical properties of bone. To address this, the present study investigated the sensitivity of RPI properties to anatomical location and tissue organization as well as examined to what extent RPI measurements explain the intrinsic mechanical properties of human cortical bone. Multiple indents with a target force of 10N were done in 2 orthogonal directions (longitudinal and transverse) per quadrant (anterior, medial, posterior, and lateral) of the femoral mid-shaft acquired from 26 donors (25-101 years old). Additional RPI measurements were acquired for 3 orthogonal directions (medial only). Independent of age, most RPI properties did not vary among these locations, but they did exhibit transverse isotropy such that resistance to indentation is greater in the longitudinal (axial) direction than in the transverse direction (radial or circumferential). Next, beam specimens (~2mm×5mm×40mm) were extracted from the medial cortex of femoral mid-shafts, acquired from 34 donors (21-99 years old). After monotonically loading the specimens in three-point bending to failure, RPI properties were acquired from an adjacent region outside the span. Indent direction was orthogonal to the bending axis. A significant inverse relationship was found between resistance to indentation and the apparent-level mechanical properties. Indentation distance increase (IDI) and a linear combination of IDI and the loading slope, averaged over cycles 3 through 20, provided the best explanation of the variance in ultimate stress (r(2)=0.25, p=0.003) and toughness (r(2)=0.35, p=0.004), respectively. With a transverse isotropic behavior akin to tissue hardness and modulus as determined by micro- and nano-indentation and a significant association with toughness, RPI properties are likely influenced by both elastic and plastic behavior of bone tissue. 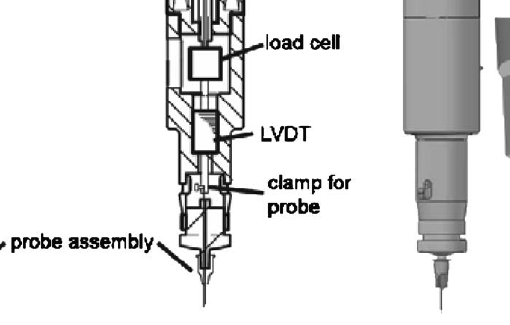 ABSTRACT The bone diagnostic instrument is designed to measure materials properties of bone even if it is covered with soft tissue such as periosteum, connective tissueand skin. It uses (1) a […] 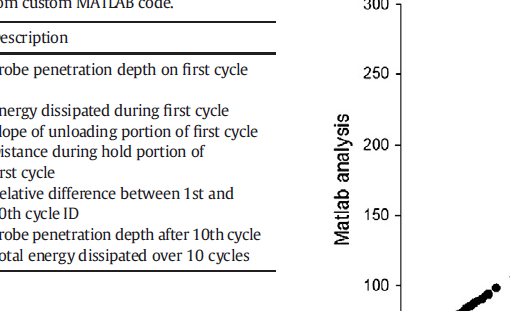