Hip fracture rates in Norway rank among the highest in the world, more than double that of Spanish women. Previous studies were unable to demonstrate significant differences between the two populations with respect to bone mass or calcium metabolism. In order to test whether the difference in fracture propensity between both populations could be explained by differences in bone material quality we assessed bone material strength using microindentation in 42 Norwegian and 46 Spanish women with normal BMD values, without clinical or morphometric vertebral fractures, no clinical or laboratory signs of secondary osteoporosis, and without use of drugs with known influence on bone metabolism. Bone material properties were assessed by microindentation of the thick cortex of the mid tibia following local anesthesia of the area using the Osteoprobe device (Active Life Scientific, Santa Barbara, CA, USA). Indentation distance was standardized against a calibration phantom of methylmethacrylate and results, as percentage of this reference value, expressed as bone material strength index units (BMSi). We found that the bone material properties reflected in the BMSi value of Norwegian women was significantly inferior when compared to Spanish women (77 ± 7.1 versus 80.7 ± 7.8, p < 0.001). Total hip BMD was significantly higher in Norwegian women (1.218 g/cm(2) versus 0.938 g/cm(2) , p < 0.001) but regression analysis revealed that indentation values did not vary with BMD r(2)  = 0.03 or age r(2)  = 0.04. In conclusion Norwegian women show impaired bone material properties, higher bone mass, and were taller than Spanish women. The increased height will increase the impact on bone after falls, and impaired bone material properties may further enhance the risk fracture after such falls. These ethnic differences in bone material properties may partly explain the higher propensity for fracture in Norwegian women.

Abstract Diabetes and osteoporosis are both common diseases with increasing prevalences in the aging population. There is increasing evidence corroborating an association […] 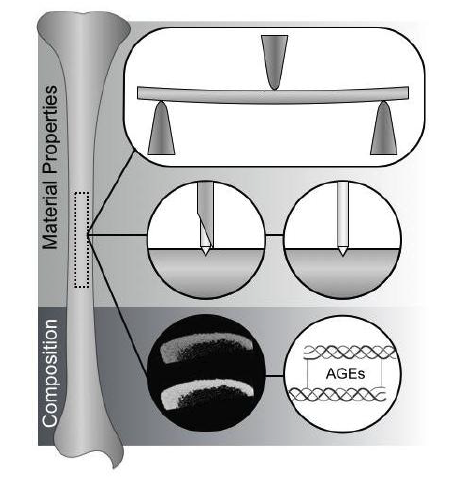 Abstract The assessment of fracture risk often relies primarily on measuring bone mineral density, thereby accounting for only a single pathology: the […]

Abstract Although low bone mineral density (BMD) is strongly associated with increased fracture risk, up to 50% of those who suffer fractures […]